As most of you reading this probably know, my blog is called ‘Thoughts of a Naturalist.’ Generally, my posts are rather thoughtful (I’d like to think), maybe even a bit ‘deep,’ as some might say. Mostly, though, this naturalist has non-deep thoughts, and thus I think that I should occasionally share some of those, too. Here is one of those thoughts, presented as a caption of the image which made me think it:

That is my vehicle (isn’t the plate a give away?). And seeing the bird poop on it struck me as a bit funny, given the plate that is also on the vehicle. Hopefully others, maybe even you, found the image a bit funny, too.

By the way, I didn’t actually decide that I’d ceased liking birds that day… 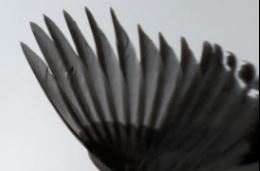 I experienced a simple, pleasing accident involving a picture (you’ll see below), which inspired this short post about how wonderful accidental occurrences can be. First, I need to set the scene…

Last week I was out in the woods, trying to catch a Song Sparrow. As I’ve been doing a lot recently, for a research project, I was trying to entice a male Song Sparrow to fly into a net that I had put up by playing the song of another male Song Sparrow. Males of this species use song to both attract a female mate and to protect their territories from other males, by advertising their presence. Bird song often says something like, ‘if you are a dude, stay away, I’m tough. If you are a woman, come to me!’ So, when a male Song Sparrow hears an ‘intruding male’ singing (that is actually a recording that I’m broadcasting), often he will rush in, sing a bit, and then fly right into the net that is in the vicinity of where he thinks another male is, as a result of what I imagine might involve blinding fury. Then I quickly take him out of the net (see picture below– usually they are in the net for less than 15 seconds). Next, I take some measurements, and attach color bands to his legs so that I can know who he is when I see him in the field again, after I release him.

It is important to note that you need permits (maybe several) to catch native songbirds like this in the US, and that broadcasting the song of a bird might cause it to use precious energy that could be better used. And misusing energy can be deadly. Point being, I’m not suggesting that you should go out and do what I’ve described. I’m not catching birds just for fun, I’m catching them because the data that I’m collecting for this project has the potential to help people better understand how to co-exist with birds, rather than causing birds to disappear.

So, that day last week, it appears that I met a Song Sparrow that is smarter than me. Or maybe random chance just wasn’t in favor of the bird hitting the net. Anyway, no matter where I put the net, or where I put the speakers, I couldn’t catch him. Multiple times, just over, just under, or right beside the net, he flew. Singing away he was, as I sat there thinking about how many more Song Sparrows I have to catch, and how this one would be doing himself a favor by going into the net already!

But, he didn’t. Just before I was about to take down the net, to stop bothering him if he wouldn’t go in, there was a flash that came out of the woods along the flooded stream to the north and a sparrow was in the net. For a moment, I thought that it could have been my Song Sparrow! But I could tell as I walked up that the bird in the net was too small, and lacked streaks on its breast that a Song Sparrow would have. I saw that it was a Field Sparrow that I had caught, a cute little sparrow with a pink bill.

I quickly took it out of the net and decided to take a picture of the little guy (I checked).

That is the picture that I had intended to take. It is a good picture, I think, kind of like what I had imagined. It shows how that adorable little bird with a pink bill looked in that moment. But I wasn’t blown away after looking at it, because the image isn’t perfectly crisp, the lighting isn’t great, and the angle of the bird isn’t perfect. Also, my fingers aren’t as calloused as they used to be from playing the guitar! Oh, how I wish I played the guitar more… In other words, the picture is adequate, but not amazing, not how it could have been. However, the ‘lower quality’ picture that I took on accident right before I took the one above left me far more satisfied, due to accidental circumstances. Here is that picture (taken as my phone was falling!):

To you, this picture might not seem exceptional. But I think that this picture which I didn’t intend to take, of a bird that I didn’t intend to catch, is special. I’m guessing that my left hand which had the bird in it may have slightly moved as my right hand dropped the phone and grabbed at it. And that slight movement might have caused the Field Sparrow to quickly flap its wings. My fumbling fingers must have hit the screen when the phone was falling and snapped the picture which captured an image of the exquisite, out-stretched wing of the little male, and his sharp claws held by my semi-calloused ones. How unexpected and exciting it was to see what my phone had captured!

And that element of accidental, pleasant surprise seems to me a great gift, as it provides a brief escape from the terrible dilute-er of pleasure that is a mind which expects too much of an event that it has had time to anticipate. Time for anticipation, I’ve found, can cause disappointment after discovering what actually happens if what happens doesn’t live up to what one hoped would happen. Had I been trying to take a picture of a Field Sparrow’s wing out-stretched, and not held in an out-stretched position by me, I probably would have been less happy with this picture. But I wasn’t trying for what happened, and so I can cherish the unexpected result.

When a phone drops, say, and captures a unique perspective that one’s mind didn’t have the chance to expect and in a way destroy, the result can be very pleasing, due to the pleasantness of surprise. When it comes to discovering books, relationships, nature trails, etc., for me, at least, a pleasant accident is almost always better than a planned occurrence. And so, while I try not to expect extravagantly of what I see coming, I excitedly stumble and fumble along, knowing that what I can’t see is coming, too.