Many of you reading this know that I am currently in the Dakotas conducting breeding bird surveys. Few understand specifically what it is that I am doing out here, or why it is important. So I am going to explain!

My employer, Bird Conservancy of the Rockies, is a non-profit organization with the goal of ‘conserving birds and their habitats through science, education and land stewardship.’ Just as a vehicular crash is likely if the driver is asleep at the wheel, the crash of a given bird species population may be likely if human beings aren’t paying attention (unfortunately, we are inflicting many unnatural stresses upon birds and other natural things, which puts them in an especially precarious state). Considering that many bird species have distinct breeding and wintering habitats, and depend upon habitats to be intact throughout migration pathways, a lot goes into understanding if species x is flourishing or floundering. In order to understand this, data need to be collected so that inferences can be made about the state of birds. Land managers and policy-makers can use this information to make informed decisions, and maybe even save a species from extinction and/or prevent an ecological community from collapsing.

I have been lucky enough to be one of the many people out in the field collecting the data. This is my fifth summer conducting what are called point count surveys (I’ve done this in Indiana, Kentucky, North Dakota, South Dakota, Nebraska, Wyoming, and Idaho). A point count survey is a commonly used method to determine bird densities. Groups of points are randomly chosen within a given area (say, the state of South Dakota, or in a specific national park) so that statistically valid inferences can be made about bird populations in that area. This random-choosing of point locations means that my work could be done 20 miles from the road in a wilderness area (which makes the job an adventure, to say the least. See one of my videos below to see a recent adventure) or in the parking lot of a shopping mall (which rarely happens).

I prefer angry rattle snakes to angry shoppers. The latter are more dangerous than the former, in my opinion. This video was a surprise for you, Mom – Love You!!

When I conduct a point count survey, I spend six minutes at a spot marked by GPS. Here I record all birds that I detect (mostly by their vocalizations) and note what minute each bird is detected in, as well as how far away it is from me when detected, what sex or age it is if I know, and if it was with other birds. Individual birds are not counted twice. Here is the datasheet that I use to record bird data.

I also record vegetation information at each point, so that statisticians can later see if there is an association between certain types of vegetation and the presence of certain bird species. Managers can then use this information to manipulate vegetative communities in ways that are good for birds. From the data that I collect, bird densities are determined. When I conduct a point count survey, I am essentially standing in the middle of a ‘bull’s-eye.’ It is expected I detect 100 percent of the birds that are in the exact center, and a smaller percentage of the birds present as distance from the center of this bulls-eye increases. Different ‘detection functions’ are used for each species, based on how easily detected they are at a given distance. For example, a Ruby-throated Hummingbird is less likely to be detected 200 meters away than is a noisy bird like a Western Meadowlark (which has a code of ‘WEME’ – we use four-letter codes when recording species). With this information, estimates of bird density can be made and the birds that I don’t count are, in theory, accounted for. Each morning (I start about 30 minutes before the sunrises and stop no more than five hours later than sunrise) I collect all of this information at as many as 16 points spaced 150 meters apart, which covers a square kilometer (if one considers the edge of the grid to be delineated by the 150 m radius of the points on the outside).

There are many exciting/interested uses of the data that we collect, as the Bird Conservancy is contracted by many entities (such as the National Park Service), but I will give only one example for the sake of brevity. The World Wildlife Fund is developing a program which would allow beef to be certified as ‘bird-friendly.’ This would allow consumers, who selectively buy with an environmental conscience, to feel assured that the beef that they are consuming is derived from cattle which were raised in an environmentally-friendly fashion. I am helping to collect the data to determine if this certification is worthwhile, i.e. if the ranchers who are embracing these practices have better bird (and therefore other wildlife) habitat on their property. Here is a link to the World Wildlife Fund website, where they briefly describe this project: http://www.worldwildlife.org/industries/beef. Incidentally, as I was working on this project, my vehicle got stuck in the Sandhills of Nebraska, on this trail: 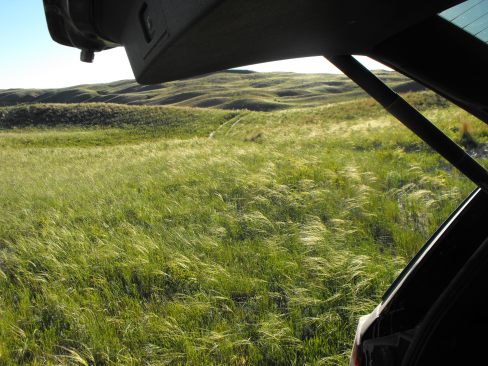 A couple of wonderful ranchers saved me, after over four solitary hours of futilely trying to dig myself out! I could write an entire book about the adventures that I have had doing these bird surveys – and maybe I will someday. But that is for some other time. As for now, I hope that you understand a little bit more about how point count surveys are conducted, and why doing so can be important. In a future post, I plan on describing just how important other species are to our own survival. And it is by way of conducting biological surveys that we can take steps towards better protecting and understanding the wonderful diversity of life which we are a part of.

Thank you for reading!

4 thoughts on “Counting Birds – How and Why”